We are looking for a new flat at the moment.  We did have plans to build our own house, but thanks to the interminable bureaucracy that is the Brazilian government we have had to put these plans on hold for a while.

My dad, back in the UK, has a thing about houses and flats.  He finds it almost impossible to walk past an estate agent’s without looking in the window to see the prices of property in the area and to see if there are any bargains going.  He is quite happy to go and view houses and think about what he could do to them to improve them.

If he were with us in Brazil he would be like a pig in muck.  And so, it seems, is his grandson.

We showed our son a couple of properties online and he was enthralled.  He loved looking at all the pictures and we took the opportunity to describe some of the things we could see in the pictures, things like the names of the rooms and some of the furniture.

We then took him with us to see some of the flats and told him we were going the ‘apartamento’.  Mr. T was in his element.  It helped that the first couple of flats were empty so he could run around without us worrying he was going to break something.  He quickly learnt the Portuguese word ‘apartamento‘ but seems to have decided that it should be spoken with an English accent so that the final ‘o’ rhymes with ‘toe’.  Do I really sound like that when I speak Portuguese? Anybody want to buy some land? by Lisbokt CC BY-NC-ND 2.0

It has now developed into an obsession, though.  Yesterday we only saw one flat, but there were tears as we were leaving amid demands for another ‘apartamento’.  During the evening we were having some quiet time before going to bed and all of a sudden Mr. T started asking about more ‘apartamentos’.

I think his grandfather, or doe doe as Mr. T calls him, will be very proud.  Despite living half way around the world, it is clear that he is his grandfather’s grandson.

Over my holiday I read ‘Dublin’ by Edward Rutherford.  It is a romantic history of the city and, while not the greatest book in the world, did provide some worthwhile insights into the home of my grandfather. 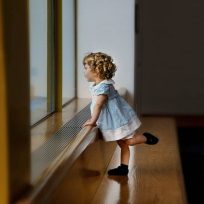 How to Make A Home Grandchild Friendly