Home » Blog » Music » Music Is Our Religion: 8 Great Songs to Play to a Toddler

Music Is Our Religion: 8 Great Songs to Play to a Toddler The great Jimi Hendrix is widely quoted as saying that ‘music is my religion’ and it could quite easily apply to our family as well.  Despite not being able to play an instrument or hold a note, I have always loved music.  My wife is considerably more talented than me, which isn’t saying much, and we have both sought to use music with our son right from a very young age.

Now that Mr. T is 2 ½ it seems he has developed his own musical tastes and is very happy to sing his songs on the toilet, in the supermarket or in the car.  Unfortunately, he seems to have inherited his both his father’s enthusiasm for music as well as his lack of talent, but that never stopped me so why should it stop him?

Here, then, is the Top 8 (it was originally 5, but since I decided to write this his choice has expanded) of Mr. T’s favourite songs that he knows how to sing/shout at least part of.  There is no Jimi Hendrix yet, but just give me some time and I’ll sort that one out.

1 – Hello Goodbye by The Beatles

This started a while ago when we were teaching him how to say ‘hello’ and ‘goodbye’.  The tune just popped into my head and I started singing it to him.  He quickly repeated me and so I went to find it on youtube.  When Mr. T watches it now he waves ant John and Paul when they wave to him.  It is by far his favourite song and when we are in the car he will often demand that we play it.

When we were in the UK my mother took Mr. T to the supermarket.  All the way around the supermarket he just sang various bits of the song at the top of his voice.  Apparently, even the most disgruntled of shoppers had a smile on their faces as they went by.

2 – Yellow Submarine by The Beatles

We have a series of books called Amazing Machines by Tony Mitton.  One of the books is called Super Submarines, and of course the submarine in question is yellow.  After about the 50th reading of this book I grew so bored I just sang the song as I turned the pages, and it was a great hit.

When I got the video on youtube I discovered that it could almost have been designed for kids.  The illustrations are so vivid with lots of fish and other creatures swimming in front of the screen that Mr. T delights in counting and naming everything that he sees.

It has also lead to a bit of creativity on Mr. T’s part as he is no longer content to just sing ‘We all live in a yellow submarine,’  apparently, I live in blue submarine, his mother lives in a pink submarine and his doe doe (granddad) and nana live in a green submarine.

3 – Blitzkreig Pop by The Ramones

The affection for this song was born at the beach during the summer.  We were getting ready to leave the house and I just blurted out ‘Hey ho, let’s go’.  The walk to the beach consisted of the whole family just repeating this refrain ad nauseam.  I still haven’t been able to correct his pronunciation of ‘Ramones’ yet, but it will happen one day.

On our last trip to the UK I was in the car with my mother and Mr. T in the back.  I was talking about something or other with my mum and, at the same time, Paradise City was playing on the radio.  To be honest, I wasn’t paying any attention to Mr. T and very little to the song, when all of a sudden a little voice popped up from the back seat singing ‘Take me home’ and I realised he was enjoying the song.  One of the few examples of him finding his own music rather than being introduced to it, and it shows impeccably good taste.

I can’t figure out if this is a brilliant parody of modern music, or itself an example of how crap a lot of stuff is.  I am siding with the last interpretation, but my son would probably say it is the height of excellence.  I showed him the video when it first came out and he didn’t seem to be that interested, but recently he will just randomly shout out ‘What a fox say?’ for no apparent reason.

Ok, so this song has been almost everywhere in the last few months, so much so that it was starting to get slightly annoying.  That was until Mr. T heard it one day and just started to sing the word ‘Happy!’ over and over again.  Even better is that he seems to mean it as well as he always has a huge grin on his face as he sings it.  I can’t help but smile now whenever I hear it.

It would seem that Mr. T is growing up to be a big Beatles fan.  I was saying ‘I love you’ one night as he was going to and he repeated after me.  I said it again, and so did he.  I realised at the time that he was probably doing it just to be able to stay awake an extra few minutes, but this was one occasion when I didn’t mind.  After a few repetitions of ‘I love you’ I started singing ‘Love Me DO’ but it didn’t get much of a reaction.  A few days later I found the song on youtube and now he will start singing the chorus whenever anybody says they love him.

8 – One More Time by Daft Punk

Mr T’s catchphrase over the past couple of months has been ‘one more’.  If he wants to watch more Peppa Pig, he’ll look at you with the cutest face ever, hold up one finger and say in a very determined voice that would almost truck no disagreement, ‘One more, ok daddy!?’  The first few times I actually fell for this ploy as I thought he really only wanted more, but I think you can probably guess what happened after that one more.  So the other week I found this on my iPod and played it for him.  He was a bit confused to start with, and then he heard the refrain ‘one more time’ and loved it.  He tries to sing the rest of the chorus as well, but he slightly mangles the words. 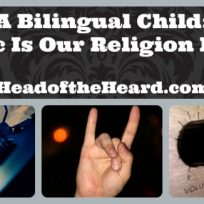 A Bilingual Child: Music Is Our Religion Part II 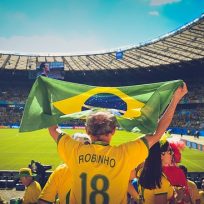