You wanna be where everybody knows your name (Wikipedia)

Just before we went on holiday to the UK and Ireland for the best part of 4 weeks I wrote about how I thought Thomas was on the verge of stepping up his language skills.  I wasn’t sure how the trip would affect this because it would be throwing him into a whole new language environment.

Before we left he was saying mais  whenever he wanted more of something.  After a couple of weeks’ holiday this had morphed into a combination of the English word and the Portuguese word and he would say ‘mais more’.  Lots of people, including this hardened cynic, thought this was one of the cutest things ever.  In the last week, when my wife came back to Brazil and we stayed on in Birmingham, he seemed to drop the ‘mais‘ and started to only say ‘more’.

He created a new name for my dad.  The last time we were there he never called him anything and we tried to get him to say ‘gog gog’ as this was the word that I used for my granddad when I was the same age, but it never really caught on.  This time around he started calling him ‘doe doe’ and we have absolutely no idea why.  This caused a problem for a while as Thomas would be shouting ‘doe doe’ but my dad was totally unaware that he was being shouted at.  After a few days of his one and only grandson yelling at him he soon learned. Whenever we had a meal together we raised our classes and said ‘cheers’ to each other.  Thomas thought this was a brilliant game and insisted on doing the same with his bottle.  The only problem was that he forgot to take a drink from it afterwards.

One new word that he seems to be experimenting with is ‘nice’.  I am not sure he knows exactly what it means yet as it is almost as if it slips out without him realising it when he is excited about something.  I will be looking out for how this word progresses in the future.

Other than that, he didn’t really pick up any new words.  There was the hint of him saying my brother’s girlfriend’s name, but this was never confirmed.  Most people also thought that his pronunciation became clearer over the course of the three weeks.  This might be true but it might also be the fact that everyone else got more used to his language and he got more comfortable around them.  It is true, though, that he had no problems understanding what people wanted him to do by the end so that his passive understanding was probably on a par with that of Portuguese.

So all in all, the trip didn’t see the surge in Thomas’ language ability that I might have been hoping for.  However, I am convinced that it did he bilingual skills the world of good and that, sooner or later, it is going to start paying off in both languages.

What Are Books For? 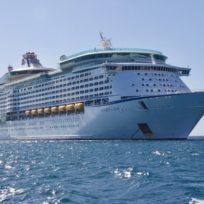 Best Family Cruises Around the World