When I was kid the best writers, for me anyway, were Enid Blyton and Roald Dahl.  Roald Dahl is still up there in my imaginary Top 10 List of favourite writers ever, but I don’t think I’ll even bother introducing Thomas to Enid Blyton.  Instead, I am wondering if Julia Donaldson will enter my son’s future list of all time great writers; we certainly have enough of her books around the house to give him a push in that direction.

The Gruffalo is such a famous book now that there isn’t much more that I can say that hasn’t been said by a million writers far better than me.  Instead, I am going to talk about its role so far in Thomas’ short life.

My first encounter with the story was through the BBC animated film of the book that stars Robbie Coltrane and Helena Bonham Carter, among other great actors.  It is a wonderful short film, full of charm and wit as well as being beautifully and lovingly produced.  The only surprise is that it didn’t win the Oscar for that year. (The Lost Thing won instead.  I mean, it’s cool and deep and meaningful and everything.  But better than The Gruffalo?  But then again, what does Oscar know about anything?  He also rewarded Titanic with 145 times and it was one of the worst films ever).

When we found out my wife was pregnant, one of the first things we got was a board version of the book which is suitable for the many tests a baby can put a book through.  It was one of the first books I ever read to a Thomas; I even read it to him before he was actually born.  I love using different voices for the different characters, including a Cockney fox, a snake who hisses all of the letter ‘s’ sounds and an owl who hoots everything.  My favourite, though is the Gruffalo himself, although if I have to read it too often his gravelly voice kills my throat.

Both my wife and myself have now read the book so often that we almost don’t need the book anymore.  Thomas still loves it and the wonderful animation from Alex Scheffler.  Whenever he see the Gruffalo tries to imitate my growl and always wants me to rush to the pages with the big hairy monster on them.  He now has the sequel book and film, The Gruffalo’s Child (he got a bit scared by the film so we have only seen it once so far), as well as Gruffalo pyjamas and a wooly Gruffalo hat.  We have another version of the book which is bigger but not a lot more delicate.  This one is kept on a high shelf so that he can’t destroy it, but the board book is kept down on ground level and happily shows signs of being well-loved.

We have a lot of other books by Julia Donaldson, which I hope to write about later.  If I had to recommend just one book for any new parents, though, it would be this one (closely followed by Dear Zoo).

Maryam’s Pick of the Day – The Gruffalo: hooray4books.wordpress.com

Dear Zoo: curiositycreates.co.uk (I got the inspiration to write about what a book means to my family, rather than the book itself, from this site). 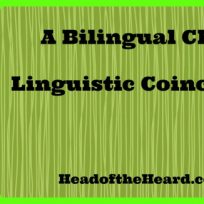