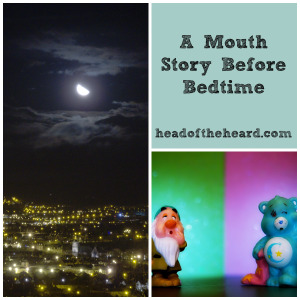 A long, long time ago…

We have had a slight change to our bedtime routine recently.  Ever since Mr. T was a few months old we would give him something to eat, then a bath and finally a bedtime story before it was lights out and hopefully quickly to sleep.

It didn’t take him long to cotton on to the fact that both his mamãe and I, and indeed, all of his grandparents, are suckers for reading bedtime stories.  This meant he would often ask for just one more story and, depending on how tired we were, or how desperate for a glass of wine, he usually got at least 3 stories a night.

Recently, though, this story routine has changed.  He now asks for only two stories, one of which is a ‘mouth story’ and the other being an ‘eye story’.

What do you mean you don’t know what a mouth story is?  And you’ve never heard of an eye story?

With the simple logic of a three-year-old it is obvious that a mouth story is one which you make up as you tell it, while an eye story is read from a book.  You see?  Blindingly clear, isn’t it?

If there is more than one person around then he usually wants the stories from two different people.  I am usually the one to give him a mouth story, and either his mamãe or vovó reads an eye story.  This has the added advantage of him hearing both English and Portuguese before going to sleep.

One more vital element of a mouth story, besides it being made up on the spot, is that it has to be about Mr. T.  We have a clearly developed structure now, so that I start off by saying something like

Tonight I am going to tell you the story of the time Mr. T went to the Fire Station.  A long, long time ago, in a galaxy far, far away, lived a little boy called Mr Tin Curitiba, Brazil…

Most of these mouth stories are based on real things that happened to Mr T at some point in the past.  I think this helps him to develop his memory as he recalls aspects of the stories.  However, we are firm believers in never letting the truth stand in the way of a good story, and so we are both happy to embellish certain parts of the stories as and when we see fit.

So our bedtime routine has evolved a bit, but we are all very happy about it and, so far at least, it hasn’t resulted in Mr T trying to stay up any later.

Images: Sleepy v Bedtime Bear by JD Hancock – CC BY 2.0 and Bedtime in Inverness by Gene Selkov – CC BY 2.0

Hello, It’s Good to Be Back