I live in the city of Curitiba in the state of Paraná in the south of Brazil.  It is a relatively prosperous city and also quite organised.  In the last 30 years the city has expanded at a phenomenal rate which initially saw the city expanding geographically.  In recent years it has reached the limits of this expansion and so more and more new high-rise buildings are going up in the centre of the city, often at the expense of old, traditional buildings.

These photos have been put together as part of the Mulitcultural Kids Blog project called ‘Your Neighbourhood Around the World.’

A View from the Balcony I live on the 19th floor of a building at the edge of the city centre.  This photo looks out to the front and left of my building where you can see in the background the football ground for Paraná FC.  This is the third biggest team in the city and for the last few years they have been languishing in the second division.  At the moment they are in 4th place and hoping to win promotion back to the top league.

Just in front of the football stadium you can see the coach station which is currently undergoing a refurbishment which will hopefully be ready in time for the world cup.

In the foreground you can Mercado Municipal, or the City Market.  This is the best place to go for fresh fruit and vegetables.  Also, if you want some special ingredients or a really good bottle of wine you’ll find it here.  It started out as a small market in the white building on the left but has since expanded to take up much of the block.  Earlier in the year they opened to latest extension which you can see as the glass fronted building to the left. In recent years Curitiba has resembled a building site as the country has experienced a boom.  This photo looks straight out of the front of our flat and you can see what will be the tallest building in Curitiba when it is finished some time in 2015.  It is difficult to see, but just behind this building is the football stadium for Atlético Paranaense where they will be holding games for the World Cup, assuming it is finished in time. Looking Down on Curitiba

And this is the view straight down from our balcony.  You can see a play area with a football pitch and basket ball court as well as the other buildings. This is the view from our building.  You can see another building going up as well as the mountains in the background.  They are partially hidden by the clouds but when the sun is out they are pretty amazing.  Unfortunately I don’t think I’ve seen them for the last 10 days due to the cloud cover.  On the other side of these mountains is the beach, so most Curitibanos know them very well. Apart from a few neighbourhoods, Curitiba is based on a grid system.  This is one of the main roads in the city and is usually jammed with traffic.

This is my son’s pre-school.  It doesn’t look like much from the outside, but they inside it is pretty cool.  This is a common feature of buildings in Curitiba in that they often look quite bland from the street, but once inside they come alive. A pre-school in Curitiba A play area in Curitiba

We have lots of parks in Curitiba, but very little in the way of swings and slides and other stuff you usually get in parks for kids.  This is a little space near my flat that has a public football pitch/basketball court. Curitiba is famous for its pine trees, known as the Araucaria or Paraná Pine.  These trees are at the back of my flat and to be honest they aren’t very good specimens.  When you get a proper old tree they are very impressive. An older building in Curitiba

In this photo you can see an older, more traditional style of house.  Most of them have now disappeared to be replaced with high-rise buildings.  The graffiti on the walls next to the house is in front of vacant land.  I have the feeling that pretty soon the vacant land and this old house will be built on. A dedicated road just for big orange busses in Curitiba Meet any Curitibano and it won’t take long for them to tell you about their transport system.  Apparently they invented the bi-articulated bus, and although I can’t find any evidence for that they certainly have a very extensive system of dedicated roads just for busses and emergency transport.

This is the market that was in the photo from my balcony, but this time from street level.  You can see the old part and the new part more clearly here. 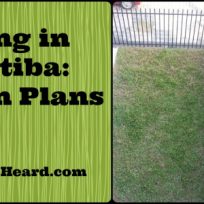