This is exactly how we had to get on and off the plane.

As part of my recent trip back home to the UK with my son to see my family and go to IATEFL we obviously had to fly from Curitiba to London via Sao Paulo.  I chose a night flight in the hope that Mr. T would sleep most of the way and I think it was, mostly, a wise choice.

On the way to the UK the plane left at midnight and my pride and joy was asleep not long after.  He slept for 8 hours and then watched Toy Story so that I only had to keep him from crying at the sheer boredom for the last half an hour or so.  On the way back to Brazil he was even better as he slept nearly all the way.

I like to think that this is down to my planning and preparing for any contingency, but it is probably more to do with the fact that he is now a seasoned traveller with this being his 3rd trip to the UK, as well as many flights within Brazil to see family and friends.

There were two things that more than slightly annoyed me and threatened on more than one occasion to wake my son up and thus guarantee an awful flight for anyone within earshot of his powerful crying.

Burning With the Light of a Thousand Suns

When was the last time you smoked on a plane?  When did you last hear of anyone who thought they were allowed to smoke on a plane?  In my case it is about 15 years ago, and since that time we are pretty much all aware that it is now illegal to smoke anywhere on a plane especially (or particularly, according to the cabin crew on TAM) in the toilets.

I therefore don’t understand why we have to have the no-smoking signs on planes anymore.  We know we can’t do it, just as we know we can’t murder that obnoxious German in the row in front of me who insists on listening to some crap music all night long on his earphones at full blast.

But maybe we have to have these signs just in case somebody feels the need to light up at 10,000 feet.  But do the signs have to burn with the brightness of a thousand suns making it impossible to sleep unless you have an industrial scale mask over your eyes?  I think not.  Every time my son turned over he saw the lights and threatened to wake up with a howl so I had to keep shading his eyes so that everybody else could get something resembling sleep. No, not that type of brass monkey

Maybe my analogy of the lights burning as bright a quite a few suns is off, because if it were true then the cabin would be a few degrees warmer than it was on the trip to the UK.  I don’t know about you, but I never have never felt the need to have the air conditioning on so high that I can see my breath when I breathe, never mind have icicles hanging off the end of my nose.

Perhaps TAM was just preparing us for the Baltic conditions that awaited us in the UK.

Fortunately, I knew about this from previous flights with TAM, so I made sure that both my son and I had plenty of clothes at the ready because those flimsy blankets they give out just don’t do the job.

As I mentioned, the flight to the UK took off at midnight.  By that time I was exhausted and just wanted to follow my son into a deep sleep, or as deep as it can be while sitting at a 95° angle.  The lights were all off (apart from the thousand suns up and down the cabin) and silence reigned, only punctuated by the odd snore and terrible Euro Disco from the row in front.

And then, at about 2am, all the lights were switched on again and the cabin crew started trundling down the aisles serving dinner.  At 2am in the morning!  The smell alone was enough to make my stomach turn over.  Who in their right mind wants to have dinner at 2 in the morning?  There were a few people not in their right minds, but nearly everybody near me just looked fairly put upon as they turned their noses up at the rubbery chicken in a mild and bland curry sauce. 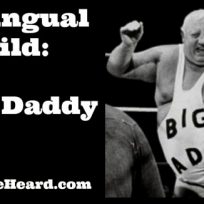 What Do You Know About Brazilians?