It’s as plain as the nose on your face (Wikipedia)

A few weeks back we spent most of the day visiting doctors because Mr. T woke up with a dodgy leg.  It was quite frightening because as far as we were aware he hadn’t banged it or dislocated it or anything.  Nevertheless, when he got out of bed he put his weight on his leg and immediately fell to the ground and started complaining that it ‘doi’ or ‘hurt’.

To cut a long story short, it wasn’t a serious problem and after a couple of days he was back to his old self: running up and down corridors and bombing around parks chasing birds.

Last week we went to the park as we often do when it isn’t pissing down.  We usually go by bus because Mr. T is obsessed with them, and that means I put him in my shoulders to walk to the bus stop and from the bus stop to the park.  When we got through the entrance of the park I put him on the grass expecting him to run off in search of a tractor or a pigeon as he normally does.

This time he just stood there for a minute.  He asked to be picked up again but I told him he should go and look for a tractor or some water.  He then pointed at his knee and said ‘doi doi’ and my heart skipped a beat.  Was his leg hurting again?  Should I get him straight back to the doctor?

But then I realised he had been running around in the flat with a football, so his leg couldn’t have been hurting him that much.  I decided to carry him to the grass where there is a patch of mud that he often likes to play in.  He wasn’t too sure, but he started to mess around in the loose earth, and so I walked to the next one and encouraged him to follow me.  He started to walk tenderly towards me when a jogger cam past on the path.  Mr. T saw the jogger and started to run himself.

Relief.  There was no pain in his leg.  It must have been something very slight, perhaps his shoe was on strange from sitting on my shoulders.  I thought nothing of it as we walked and ran around the park hunting tractors, playing with cold water and feeding the fish.

When it was time to head back to the bus Mr. T stopped again and asked to be carried.  I wanted him to walk until the park gates and then I would carry him to the bus stop and so I asked him to walk.  He looked at his knee and said ‘doi doi’.

I was astounded.  His knee obviously wasn’t hurting him because we had spent over an hour messing around.  He wanted to be carried but I had refuse, twice.  And each time I had refused he had complained about a sore knee to try to get me to do as he wanted.

What I wanted to call him (Wikipedia)

…and yet, at the same time, I was impressed.  He was trying to manipulate his environment to the way he wanted it to be.  He knew that when he had legitimately complained about having a bad leg I had carried him everywhere, so he experimented with trying it again.

And after all, it would be impossible to exist in human society without lying occasionally.  Right?

Nevertheless, I wasn’t about to reward him for his first experiment with telling porkie pies, so I told him I wouldn’t carry him and that he should walk with me and then I walked off.  He stood there for a bit, but eventually decided he wasn’t going to win and so ambled along after me as if nothing had happened.

Is this our first lie?  He is two years and two months.  Is this early to be lying?  Or is it not really a lie, just an attempt to manipulate me to do what he wants?  If you have any answers, please leave them in the comments below. 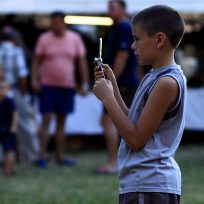 A Bilingual Child: Whatsapp and language use